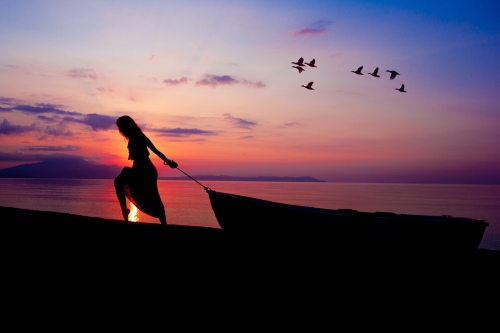 The other day, my son was trying to pick up something that was too heavy for him. As he was struggling, I offered to help. He declined and kept trying. Again I offered help, but still he refused. He was determined to move it himself. Finally he asked for help. As I picked it up, he yelled his disapproval. Confused, I asked how he wanted me to help. He said he wanted to hold it, but I had to pick both of them up and carry them. He wanted me to carry the weight, but he wanted to be holding onto it.

I laughed, but I also thought, “How many times do I cry out to God with a heavy load, but want the same thing?” If you’re like me, you find yourself carrying loads that are too heavy for you. God is there wanting to help, but we want credit for carrying it. We want God to help, but we want Him to do it our way. We hold onto our troubles because we’re afraid to let them go, but God wants us to give them to Him. He wants us to release them so He can carry them.

Psalm 55:22 says, “Pile your troubles on GOD’s shoulders— he’ll carry your load, he’ll help you out” (MSG). God wants to help us with our heavy loads, but we have to be willing to let go of them if we’re going to cast them on His shoulders. Letting go is the hardest part and it’s why so many of us want Him to carry us while we’re holding on to the troubles. We’ve all heard the phrase, “Let go and let God.” Maybe it’s time we started doing that. He’s more than capable of carrying your troubles if you’ll just let them go.

Photo by Rakicevic Nenad on Unsplash

One response to “Letting Go”