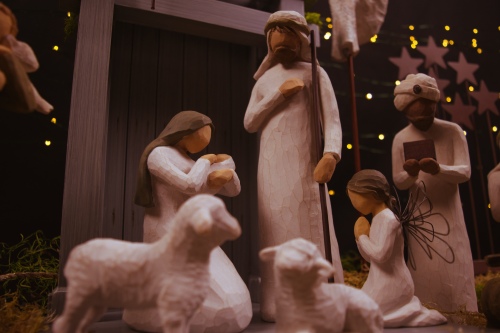 This time of year, it becomes obvious that many of us don’t remember much more than the first verse of most Christmas Carols. As we lead up to Christmas, I want to explore some powerful verses in some of my favorite carols.

A few years ago, we were preparing for Christmas. I was putting gifts in boxes, then sliding them to my wife who was wrapping them. After she would wrap, she would ask who the gift was for. On one such gift, she looked at me with pen in hand expectantly. I looked at the box, smiled and said, “That one is for you!” She had been so busy wrapping that she couldn’t remember what was on the box.

That’s kind of how God snuck the gift of our savior into the world. It wasn’t a big showy presentation. It was delivered in a barn through an humble girl who was barely known. The world would expect the King of Kings to get around the clock coverage, tweets wondering what His name would be and hashtags so everyone could follow. But that’s not how God did it. He did it oppositely from the way we would have done it.

The lyrics of “O Little Town Of Bethlehem” described it like this:

So God imparts to human hearts the blessings of His Heav’n.

No ear may hear His coming, but in this world of sin,

Where meek souls will receive Him still, the dear Christ enters in.

God silently sent us His gift of redemption. The path to Heaven was illuminated by a star instead of spotlights. It was announced to shepherds instead of people of social stature. Those who were looking and listening found a baby lying in a manger in the small town of Bethlehem, which wasn’t even the capital. God entered this world silently so that those who are seeking Him will find Him. Those who find Him and receive Him will have His peace live in their heart and their sins forgiven. Oh what a gift that was given in the little town of Bethlehem.

Photo by Dan Kiefer on Unsplash

Each year, I take a one week sabbatical from writing to refresh and to spend time with my family. Each devotion this week will be a past favorite. Enjoy and I’ll see you next week.

Tagged as christian living, Christmas, christmas devotion, Devotional, for unto you is born this day, o little town of bethlehem, salvation, shepherds were the first to know, what does the bible say about, where was jesus bown, why didn’t god announce Jesus’s birth, why was jesus born

One response to “O Little Town Of Bethlehem”