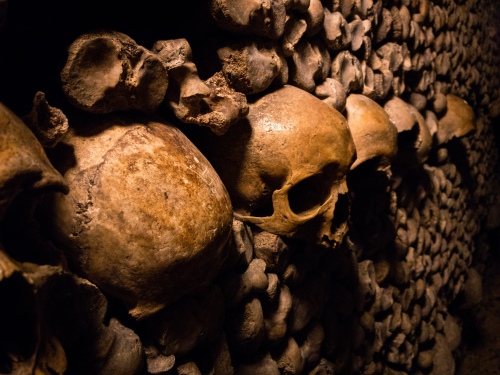 At a young age I felt like I was called into ministry. I began preparing and practicing, but honestly I was afraid of it. It was a dream that was in front of me, but the older I got, the further into the future this dream seemed to go. Then in a single day, the dream died. I went through a divorce that couldn’t be avoided. The denomination I was a part of at the time had a rule back then that you couldn’t be a minister if you were divorced. I was devastated by both the divorce and the fact that I could never be in ministry. All my life had been pointing to the dream of ministry and it was gone. Not only was I having to start life over, I was lost without a dream to guide me. That is until a friend told me,”Do you really think that man can negate God’s calling?”

In Ezekiel 37, God showed Ezekiel a valley of very dry bones. I imagine it was quite a sight to see. Dead people’s bones were scattered everywhere and there were none connected together I’m sure. As God showed him all these bones, He asked him a question in verse 3. “Son of man, can these bones become living people again?” (NLT) You and i both know that humanly it impossible for them to be brought back to life, but that’s not how Ezekiel answered. Instead of stating the obvious, he replied, “O Sovereign Lord, you alone know the answer to that.” At that answer, God told him to speak to those bones and prophesy to them to come alive and live again. Just like that the bones all came together and were covered with flesh. Then he was told to speak and prophesy the breath of life back into them and they became a living army.

You may be where I was once in feeling like your calling or the dream God gave you is dead and in the past. It doesn’t matter whether it’s anything you’ve done, someone has done to you or if it’s from not going after it in time. Man, including yourself, cannot take away God’s promises, nor His plan for your life. You may be looking at a valley of the dead bones of your dreams today, but God can make them live again. Speak to your dream. Speak life into it. If God has placed it in you, it will happen no matter what things look like today. Be like Ezekiel when you’re looking at what seems dead. Don’t pronounce that it can’t live again. Let God answer that question and watch Him begin to bring the pieces back together again.

Photo by Travis Grossen on Unsplash

One response to “Reviving Dead Dreams”