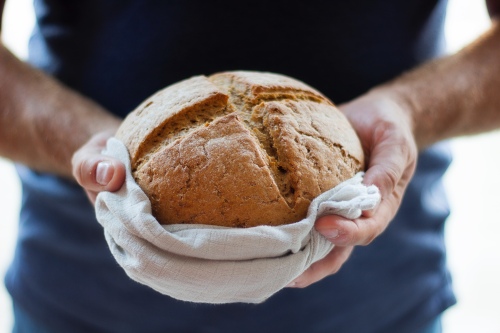 My eight year old son tries to be fiercely independent. He wants to do things himself without my help. I can see him sometimes working on something he can’t quite figure out. I watch his frustration begin to rise, and I say, “Bring it here. Let me try.” Of course he keeps trying getting more upset. I make my offer again. Nope, he wants to keep trying. That’s usually when frustration starts turning into anger. He then has the choice to make – he can walk away from it or he can bring it to me. Once he puts it in my hands, I’m able to do with it what he cannot. Many times I’ll set it up so that he can participate in finishing it. When that happens, both of us smile and are happy.

In Matthew 14, King Herod has John the Baptist beheaded at the request of his step daughter. Jesus was sad over the loss of his cousin and went into a remote area to mourn. While he was there, someone spotted him and started telling people where He was. Soon thousands of people made their way to Him for healing. As it was getting dark, the disciples asked Him to send the crowds away so they could get dinner in nearby villages. In verse 16, Jesus said, “That isn’t necessary – you feed them” (NLT). I’m sure the disciples panicked and got frustrated trying to figure out how they could do it. They found five loaves and two fish and told Jesus that was all they had and they couldn’t do it. That’s when Jesus said, “Bring them here.”

The difference in both of these stories is whose hands things were in. How long do we try to do things while Jesus is telling us, “Bring them here”? You can keep trying to do the impossible on your own or you can trust Jesus with it. You can get frustrated trying over and over or you can put it in His hands. The feeding of the 5,000 was a miracle because the disciples were able to say, “We can’t do it,” and then handed over what they had to Jesus. One of the most difficult things about faith is letting go. We are fiercely independent people who want to do things ourselves. At the end of the day we have to choose whether we allow that frustration to turn to anger or put action to our faith and trust God with it. He is able to do above and beyond what we are able to. If we will trust Him, He will often allow us to participate in the miracle.

Photo by Kate Remmer on Unsplash

Tagged as bible study, christian living, Devotional, devotional on, five loaves and two fish, getting frustrated, give it to god, Jesus feeds the 5000, miracles, Putting our problems in God’s hands, trusting God, what does the bible say about, When we can’t god can

2 responses to “The Right Hands”