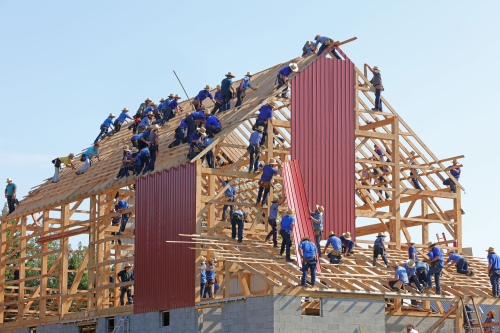 When I was a teenager, I got a summer job working construction. It was hard work to do in the Texas summer heat. I got to see how houses are built. Everything had to be built in order. The foundation crew had to set the form for the foundation, then the plumbers would come put their pipes in, the concrete would then be poured, the framers showed up after it cured, electrical would then show up before the dry wall and so on. Each crew had a part to play and a time to do their work so the house could be move in ready.

Our lives are constantly under construction as well. There are things going on that have to happen in order for God to build His master plan in us. Just like building a house, there can be delays. Things don’t always go according to the plan the way we think it should either. Working in construction and being under construction can be difficult and trying at times. The great news is that God is still working in you and in me. He still has a plan for our lives and He’s working it out. He’s not just building our lives as individuals either. We are being built together as one.

Ephesians 2:22 says, “In union with him you too are being built together with all the others into a place where God lives through his Spirit” (GNT). We are each a part of the same construction project. Knowing that, we need to give each other some grace. We’re all under construction and we’re all being built together. Your life may be farther along in the process than someone else’s. Be a person who helps them through the processes you’ve been through. Look for ways to edify others instead of slowing their progress. We’re all a work on progress. Let’s give God and others patience because we need it too.

Photo by Randy Fath on Unsplash

Tagged as being built up in faith, building together, christian living, Devotion, Devotional, encouragement, giving grace, god is working out His plan, god’s house, grace, my life is under construction, spiritual growth, trusting God, understanding, we are under construction