Tag Archives: free from your past

Tagged as being free, bible study on, bible verses on, christ has set us free, Devotional, devotional on, free from your past, free indeed, He who the son sets free, set free, walking freely, walking in freedom, what does the bible say about, You have been set free, youve been set free

Several years ago, before I did Bible verses on Friday’s, I did “Free Friday”. I had attended a conference and heard people discuss all kinds of fears and self limiting behaviors they had. My idea was to write each Friday about getting free from the things that hold us back or slow us down when trying to move forward. Hebrews 12:1 tells us to lay aside anything that hinders us, slows us down or ensnares us. The understood emphasis in the sentence is that it’s up to us to do it. The only way I have the power to lay aside any sin that’s holding me back is if I’m still holding onto it after I’ve been forgiven of it. Every one of us are holding onto things that hold us back and are keeping ourselves imprisoned because of guilt or shame. It’s a trap of the enemy to hinder our growth and freedom.

Remember that Romans 8:1 tells us that there is no condemnation for those who are in Christ. That means once Christ has forgiven you, He no longer condemns you for that sin. If you’re feeling it, it’s usually self induced and needs to be later aside. Remember that according to Galatians 5:1, it was for freedom that Christ set you free. He freed you so you could live and walk in freedom from your past. Yet, so many of us rarely walk in that freedom because we allow shame to hold us back. We allow ourselves to be ensnared in a mind game that tells us we must live the rest of our lives paying for our past. Paul, who wrote those verses, called himself the chief among sinners. He killed Christians for a living. If he was able to live in that freedom, you’re allowed to as well.

In John 8:36, Jesus reminds us that we are God’s children who are no longer enslaved to our sin or our past. He said, “So if the Son sets you free from sin, then become a true son and be unquestionably free!” (TPT) If Christ has forgiven your sins, you are unquestionably free from the eternal effects of them. You don’t have to live this life paying penance for your past. Every time those thoughts come in, chase them out with these words of Jesus. Every time guilt creeps in, chase it out with Romans 8:1. You are no longer a slave to your past. The blood of Jesus is stronger than anything you’ve ever done. It has the power to forgive and to set you free. Begin today to live unquestionably free and let God use your life to accomplish the purposes He created you for.

Photo by Benjamin Davies on Unsplash

Tagged as being free, bible study on, bible verses on, christian living, Devotional, devotional on, forgetting my past, free from your past, if the son sets you free, it was for freedom, lay aside the sin, living in freedom, there is no condemnation, walk in freedom, what does the bible say about, you are free indeed

The Power Of The Resurrection 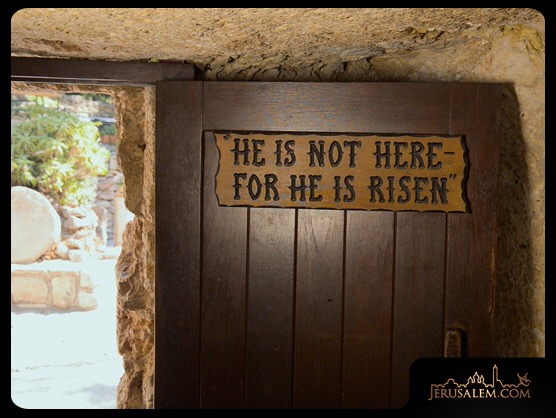 Several years ago, I had the incredible privilege to celebrate Good Friday at the Garden Tomb in Jerusalem. As I attended the sunrise service, I kept staring over at the door to the tomb. I imagined the size of the rock that once covered that entrance. I pictured Mary weeping just a few feet away. I wondered what direction Peter and John came running from. It was surreal to be celebrating the resurrection of Jesus by the tomb that once held Him. As the sun came up, my mind turned its attention to the Angels who were there and the message they gave to all who came to that place.

Mark 16:6 records them as saying, “Don’t be alarmed. You are looking for Jesus of Nazareth, who was crucified. He isn’t here! He is risen from the dead!” All of christianity hinges on that last statement.  I Corinthians 15:14 says, “If Christ has not been raised, then all our preaching is useless, and your faith is useless. (NLT)” Jesus didn’t come just to die. He came to rise again. He wasn’t just going to be crucified for our sins, He was going to be raised from the dead to give us life. His resurrection brought life where Adam’s sin brought death. Jesus defeated the power of death the moment He burst out of that tomb.

In Luke 24:5, the Angels asked the women, “Why are you looking among the dead for someone who is alive?” Jesus had told them He would be raised on the third day, so why were they visiting the borrowed tomb with spices to embalm Him? They were looking for a crucified Jesus instead of a resurrected Jesus. Their message goes out to us today. Quit looking for the right thing in the wrong place. Our Lord was crucified, but He rose from the dead. You don’t have to go to a tomb to find Him. He left the place of the dead so that He could walk with you today among the living.

The final thing I thought about as I sat there came from Mark 16:7. The angel said, “Now go tell his disciples, including Peter, that Jesus is going ahead of you to Galilee.” My favorite part is where he said, “including Peter”. After Peter denied Jesus, I’m sure he no longer felt like a disciple. I’m sure he was beating himself up for the mistake he made. The Angels wanted to make sure he knew that he was still loved and considered by God as a disciple. They sent him a clear message that he was forgiven no matter what he did.

Too many times we beat ourselves up over sins we have committed. We think keep ourselves from the grace that has been given to us because we beat ourselves up. While Jesus’ death on the cross paid the price for your sin, His resurrection gives you new life after it. You can put your name in that message where Peter’s name is. The Angels are speaking to you too, they are saying you are loved, you are forgiven and Jesus is waiting for you. All He’s asking is that you trust the power of the resurrection, that you leave the cemetery of your past and that you move ahead where He is waiting for you.

Tagged as daily devotions, Devotion, Easter, easter devotion, easter sunday, forgiven, free from your past, Good Friday, Holy Week, jesus rose from the dead, salvation, why are you looking for the living