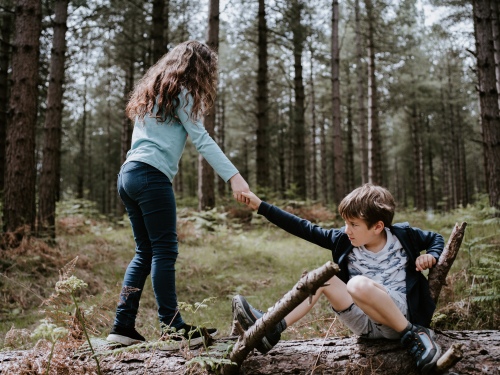 One of the best Christian books I’ve read is “Good to Great In God’s Eyes” by Chip Ingram. It starts off asking the question, “Is it really wrong to want to be great?” As a Christian, we’re taught to be humble, but somehow we’ve equated being humble with being average. It’s as if you can’t be great and humble at the same time. I don’t want to live an average life, and I don’t believe we were created to either. The words from Jim Collins book, “Good to Great”, spoke to my soul when he wrote, “Good is the enemy of great.” How often do we settle for good when God has created us for great things? How often have we felt ashamed for wanting to be great?

When the disciples asked Jesus about who would be the greatest, He didn’t chastise them. He simply explained that greatness in His kingdom isn’t measured the same way it is in our world. He put the desire in you to be great, and even gave us the Great Commission as our mission. You can’t have the impact on the world that you’re called to have and not be great. The difference is that in His kingdom, greatness comes from serving others and helping them reach their God-given potential. It’s about magnifying His name instead of our own. If you truly want to be great in God’s kingdom, then you’re going to have to be disciplined and do things that make an impact on eternity.

Here are some Bible verses on being great in God’s kingdom.

2. But this is not your calling. You will lead by a completely different model. The greatest one among you will live as the one who is called to serve others, because the greatest honor and authority is reserved for the one with the heart of a servant.

3. Whoever makes himself great will be humbled, and whoever humbles himself will be made great.

4. The silence was deafening—they had been arguing with one another over who among them was greatest. He sat down and summoned the Twelve. “So you want first place? Then take the last place. Be the servant of all.”

Photo by Annie Spratt on Unsplash

I always thought I was a person who had been faithful in the little things until I read the final chapter in “Good to Great in God’s Eyes” by Chip Ingram. The last chapter is about developing great habits and in it he lists six great habits to adopt. One of which is “Do your own dishes – The principle of responsibility”. He wrote about putting up your folded clothes instead of leaving them out, washing your dishes instead of putting them in the sink and putting your dirty clothes in the hamper instead of on the floor. Each one hit home because I’m guilty of all of them.

If that wasn’t enough, he then wrote, “We usually don’t make a conscious decision to expect others to clean up our messes. It’s a habit. But behind that habit is an assumption that it’s up to someone else to make our life work.” Subconsciously we leave things out, put dishes in the sink and throw our clothes on the floor in hopes that someone else will do it. When they don’t do it, we get exasperated and huff and puff while we have to do it. Am I the only one like this?

These small examples are part of a bigger problem. The attitude of expecting others to make our life work bleeds into our spiritual life too. We expect our pastor to be in charge of our spiritual growth. We expect them to read the scripture to us instead of looking it up ourselves. We get upset when we don’t get anything out of the service, yet we put nothing into it. All of these are “little” things, but they prove to God that He can’t trust us with the big things. We can’t grow because we don’t have any roots.

Zig Ziegler once said, “If you take care of the little things, the big things will take care of themselves.” There are so many little things in our lives that we’ve left undone. When they become big things, we wonder where God is in our mess. We expect Him or someone else to come save us because we’ve come to expect others to clean up our messes. We are the ones who made them, yet we feel it is God’s responsibility to clean them up. Then, when it’s not cleaned up immediately, we get upset with God for not answering.

Our messes are our own responsibility. We create them because we haven’t learned to be faithful in the little things. Today, look at your life to see what little things need your attention. If you’re in a big mess, trace it back and you will see that it started with something little. Once we learn to do the menial tasks, God can trust us with more important tasks. I know I still have lots to work on in this area myself. I can’t expect God to do more through me than He’s doing right now until I learn to take care of the tasks I thought didn’t matter.

In our small group, we are reading through “Good to Great in God’s Eyes” by Chip Ingram. Last night we were discussing the chapter “Pray Great Prayers”. As we were talking about keeping a prayer journal, my wife mentioned that because of the digital age, that’s something our kids are missing out on. The vast majority aren’t keeping journals. Because they aren’t, they can’t flip through pages to see where they thought the world was going to come to an end and then it didn’t. They don’t have a record of the ways that God has moved in their life.

In the chapter we discussed, Chip mentioned that he keeps a prayer journal where he writes down things that are too big for him to handle. By writing them down, he is transferring them over to God. He said he also leaves a little space under each one so that when it gets answered, he can put a note in there. When his faith needs a boost, he goes back through that journal to remind himself of the times when he was faced with the impossible and then he reads the notes below it where God answered. It helps him when he faces other impossible situations.

As we discussed that, we began to talk about how we remember years ago when churches would have testimony time. It’s something that’s missing from our modern church. I believe it’s something that is still necessary. Scripture says that we overcome by the blood of the Lamb and the word of our testimony. We need to hear the stories of what God is doing in people’s lives. We need to see His hand at work around us. It reminds us that He’s still listening and that whatever we are facing, isn’t too big for God.

We then went around the room and shared stories of a God answering prayers, big and small. Each person in our group could point to a time when God answered. That built my faith up. God knows your need and He hears your prayers. You don’t have to use your prayers to try to persuade God to move in your favor. You simply need to make your requests known to Him. Call out the promises He has made in His Word. Remind Him of what He’s done for others. Your heartfelt prayers touch the heart of God. Your need is not too big and it’s not too small. He’s not so concerned with everything else in the world that He doesn’t have time for you or your needs.

If you need your faith built today, ask someone what God has done for them. Ask them what prayers He has answered. If He’s answered something, then tell others. They need to hear what He has done for you. Your testimony will help them be an overcomer in their situation. If you don’t know who to tell, then use the comments below to share what God has done for you. People will read it and be blessed. God still moves today. God still answers prayers. Tell Him what you need, He’s listening right now.

Tagged as answered prayers, chip ingram, daily devotional, Devotion, god answers prayer, good to great, good to great in god's eyes, overcome by the blood of the lamb and the word of our trstimony, pray, prayer, testimonies, testimony

I’ve started to read “Good to Great In God’s Eyes” by Chip Ingram. The book is for people who don’t want to be ordinary Christians. In the book there are ten practices that we can adopt as believers to live extraordinary lives in God’s eyes. He uses a lot of the techniques that I’ve learned in selling and management. I believe the Bible is full of men and women who lived great lives that set them apart and that you and I can live a life that would be worthy of writing about.

The first thing he talks about in the book is thinking great thoughts. He mentions that he doesn’t start with a physical action or attitude because true change starts in the mind. From all of my learning, I have found this practice to be true. In order to change a behavior in our lives, we first have to change how we think about it. You and I are creatures of habit, but we are not creatures who are stuck in our ways unless we believe that with our mind. If you want to change for the better, you have to believe that you can change.

Think about Romans 12:2. It says, “Do not be conformed to this world this age, fashioned after and adapted to its external, superficial customs, but be transformed (changed) by the entire renewal of your mind by its new ideals and its new attitude, so that you may prove for yourselves what is the good and acceptable and perfect will of God, even the thing which is good and acceptable and perfect in His sight for you (AMP). Our transformation, our changing comes from the renewing of our mind. We renew our mind by renewing our thoughts. We renew our thoughts by being intentional about the thoughts we think.

It also says that when we renew our mind, we get a new attitude. When we get the new attitude, we will be able to prove what is the good and acceptable and perfect will of God. The Message says then you’ll “readily recognize what He wants from you and quickly respond to it. Your attitude will determine your action. You will begin to do the things that God wants you to do. You will begin to live the life a God wants you to live. You will start moving from a good, Christian life to a great Christian life. It all starts with the thoughts you think. If you want to change your life, change your thoughts.