Tag Archives: the birth of Jesus 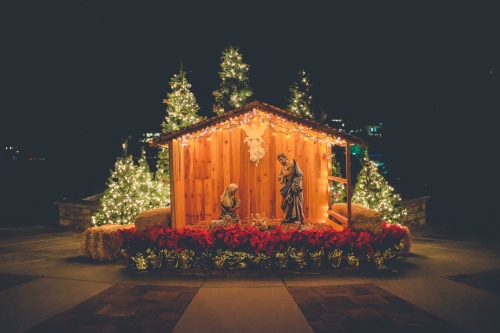 “Therefore the Lord Himself shall give you a sign: Behold, the young woman who is unmarried and a virgin shall conceive and bear a son, and shall call his name Immanuel [God with us].”

“For a child will be born to us, a son will be given to us; And the government will rest on His shoulders; And His name will be called Wonderful Counselor, Mighty God, Eternal Father, Prince of Peace.”

“This is how Jesus the Messiah was born. His mother, Mary, was engaged to be married to Joseph. But before the marriage took place, while she was still a virgin, she became pregnant through the power of the Holy Spirit.”

“While Joseph was thinking about this, an angel of the Lord appeared to him in a dream and said, ‘Joseph, descendant of David, do not be afraid to take Mary to be your wife. For it is by the Holy Spirit that she has conceived. She will have a son, and you will name him Jesus—because he will save his people from their sins.’”

“Joseph went from the town of Nazareth in Galilee to the town of Bethlehem in Judea, the birthplace of King David. Joseph went there because he was a descendant of David. He went to register with Mary, who was promised in marriage to him. She was pregnant, and while they were in Bethlehem, the time came for her to have her baby. She gave birth to her first son, wrapped him in cloths and laid him in a manger—there was no room for them to stay in the inn.”

““That night there were shepherds staying in the fields nearby, guarding their flocks of sheep. Suddenly, an angel of the Lord appeared among them, and the radiance of the Lord’s glory surrounded them. They were terrified, but the angel reassured them. ‘Don’t be afraid!’ he said. ‘I bring you good news that will bring great joy to all people. The Savior—yes, the Messiah, the Lord—has been born today in Bethlehem, the city of David! And you will recognize him by this sign: You will find a baby wrapped snugly in strips of cloth, lying in a manger.’”

“So the Word became human and made his home among us. He was full of unfailing love and faithfulness. And we have seen his glory, the glory of the Father’s one and only Son.”

Merry Christmas. God is with you.

If I were to ask you who was invited to the birth of Jesus, most of you would answer, “Shepherds and wisemen.” I believe that answer is wrong. Only shepherds were invited to the birth. Many scholars believe the wisemen May not have shown up for over a year after His birth. I still believe it’s important that the wisemen came because they showed that Jesus would be the King of Kings. Now think about the manger scene with just shepherds. Interesting.

Why would God only announce the birth of the Savior of the world to shepherds and no one else? Why would the place God prepared for Him to be born be a barn? I believe we can go back to Psalm 23 for that answer. The Lord is my shepherd. God finds that shepherds make great kings. They provide for their flock, they lead them and protect them too. Before Jesus was a carpenter, He was born a shepherd.

When the wisemen went to King Herod looking for where the messiah was born, Matthew 2:6 says they read him, “And you, O Bethlehem in the land of Judah, are not least among the ruling cities of Judah, for a ruler will come from you who will be the shepherd for my people Israel” (NLT). God knew we would need a shepherd more than a king. While kings rule and dictate, shepherds lead and serve. People were looking for a king to free them from the oppression of the Romans. Instead God sent them a shepherd to free them from their sin.

If you’ve accepted Jesus as king of your life, have you let Him also be your shepherd? Have you given Him not just the ability to rule, but also to lead? Sheep willingly follow where their shepherd leads, but subjects are forced to obey a king. God doesn’t force us to serve Him as a king would. Instead, He invites us to follow Him out of love. I believe shepherds were the only ones invited to His birth to remind us God knew we needed a shepherd more than a king.

Photo by Dan Kiefer on Unsplash