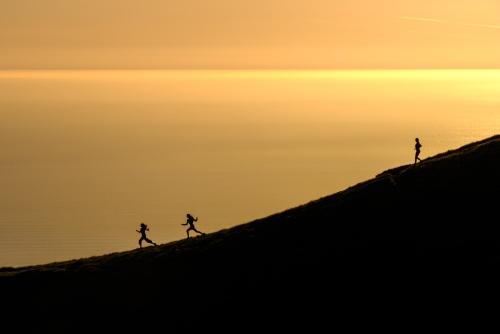 In high school I had a coach that was tough. He would spend an hour and a half of a two hour practice conditioning our team. We would run laps outside and sprints inside. When we would beg for water, he’d say, “You can’t stop a game to get water.” After we would practice our plays for about 30 minutes, we’d finish practice with more running. Before you left, you had to make 100 free throws. He would tell us, “We may not be the best team on the floor, but we will be the best conditioned team.” I can tell you he was right. We ran the other teams out of the gym because they would get tired. When we held the state championship trophy, it was all worth it.

God, like that coach, is always looking ahead in our lives, seeing what we can’t see. He knows what it will take to condition us now so that we will endure the things that are coming. Preparing and conditioning are never easy, nor are they fun, but they build in us the endurance to push through where others fail. They get us in shape spiritually for the spiritual battles that we will face. At times during conditioning we can feel like giving up or want to start questioning why we aren’t spending more time practicing the things God is going to use us for. I’ve learned that if the enemy succeeds in destroying our witness, he can keep us from giving the message. We must be able to endure the pressure first.

I love the way The Passion Translation words Psalm 23:4. It says, “Lord, even when your path takes me through the valley of deepest darkness, fear will never conquer me, for you already have!” God’s path rarely goes where we think it should. Many times it goes into dark places of testing and conditioning because God wants to build your trust in Him before the enemy attacks. What you learn in the valley will sustain you in the battle. Preparation and conditioning are necessary to make you more than a conqueror. The greater God’s plan is for your life, the greater your preparation and conditioning will be.

Photo by Todd Diemer on Unsplash

Tagged as christian living, Christianity, Devotional, devotional on, encouragement, god conditions us, god gets us in shape, god prepares us, god prepares us for his plan, gods plan for me, how does god prepare me, psalm 23, spiritual growth, spiritual war, walk through the valley of the shadow of death, what does the bible say about

You Are Equipped To Do…

Ever since I was a kid, I have loved the story of David and Goliath. It wasn’t long after David arrived to the battlefront that Goliath started yelling and scaring the Israelites. When he heard the taunts and the curses against God, David felt a stirring inside to do something about it. He started asking questions about what would be done for the man who killed him. It wasn’t long before he was standing in front of the king saying, “Don’t worry about this Philistine. I’ll go fight him!” After Saul was convinced, he tried to equip David for the job.

He gave him the king’s armor because it was the best. He knew that his country’s fate was now in the hands of a shepherd. If David failed, they would be killed and his people would be servants of the Philistines. Of course, the armor didn’t fit and David didn’t want it. Instead he went out and found five smooth stones out them in his bag, grabbed his sling and headed to the battlefield. Instead of letting someone else equip him for what God called him to do, he let God use what had already been placed in his hands.

So many times, we feel called to do something. We see a need and we also see everyone else around us just looking at it. People are so afraid they’ll fail if they try to meet it, that they never try. God then puts it in your heart to meet that need. He wants you to be the one to risk failure. He wants you to be the one to step out in faith and act in obedience. He put you in the right place at the right time so that you could be the answer to someone’s prayer. The problem is that either you don’t feel you’re properly equipped or trained to do it. You have a choice to make at that point. Do you join the others who merely look at the problem or do you believe that God will equip you to do it?

The writer of Hebrews wrote in chapter 13:21, “May He (God) equip you with all you need for doing His will.” It’s God who will use the skills He has already given you to accomplish what He has called you to do. You may need to pick up some stones to help you, but the tool to accomplish it is already in your hands. When God gives you a burden to do something for Him, He will equip you to do it. You just have to open your eyes to see how. David remembered that he had already killed a lion and a bear. He drew faith from those previous experiences that He could also kill a giant.

God will also use the Bible to build your faith and to help you accomplish what He called you to do. I I Timothy 3:17 says, “God uses it (scripture) to prepare and equip His people to do every good work.” If you’re facing the unknown in ministry then spend lots of time reading God’s Word. He will use that to prepare you. Reading it will build your faith as well. When David stepped onto the battlefield that day, he was equipped to do what God had called him to do and he was confident because he knew what God had done for His people in the past. He drew strength from God’s promises and you can to. Whatever God has put in your heart to do, He has equipped you to do it. Step out in faith today and trust Him to be true to his Word.